He resigned seven years ago. Now, the Mars Hill elders are once again calling for him to repent.

The Christian music scene has had its ups and downs through the years.

Sometimes those ups were fun in their own right – as anyone who was the right age at the right time to match the rhythm of their head with the rhythm of DC Talk’s belly can attest – but others were downright cringeworthy, as anyone who was du-du-down with the DC Talk can attest. Occasionally, truly talented acts like Jars of Clay would even briefly cross over into the mainstream and get to open for major acts such as Sting.

But no matter how musically gifted or lyrically milquetoast the Christian musical scene was after it blossomed in the 1980s and 90s, it could never match the sheer accidental strangeness of its 1960s and 70s precursors.

Some of the records in question were simply innocent, naive of how naming their record after a beloved gospel song could later be reinterpreted in a more disturbing manner. But nonetheless, there are many, many, many examples of, “He touched me”. 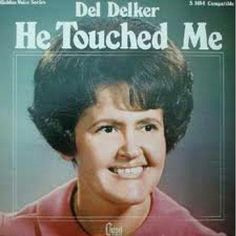 First there’s this one, where her smile looks like a grimace as she realizes she’s actively being touched. 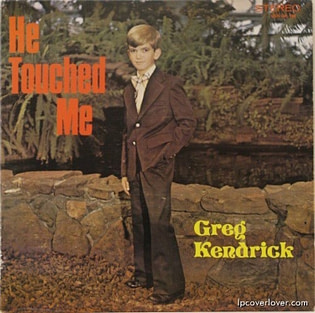 And this one just seem especially off-putting, with the little boy’s apparently resigned face. One can assume that he just wanted the photographer to take the photo already, but paired with the title and 50 years of retrospect it seems meloncholy.

With this album, the husband’s hesitant smile somehow makes it more uncomfortable.

And lest those unfamiliar with the song’s popularity among southern Gospel singers think it was a minor hit, apparently even Elvis was touched.

Some people weren’t content with being touched, however. Others wanted to reach out and touch.

But those days weren’t all about spiritual-tactile issues. Sometimes God did more than touch. Sometimes God straight up tied people’s hands and feet to a heavenly paddle and puppeteered them as Christian singers, as evidenced by Ava Kathaleen Beaty’s “God’s Chosen Puppet”.

But maybe Beaty was just responding to the musical tastes of the time. Puppets were huge in Christian music of the era. For example, Eric the Christian dummy had more than one record. He’s seen here apparently taking a nap in a park with Beverly Massegee.

Meanwhile, Uncle D apparently liked to spend his weekends reading the family Bible with dummies Charlie and Sheila in the church sacristy.

Grace and Wilbur took ventriliquism to the next level, however, and included not only multiple dummies on their record but a couple of full-size furries as well, warning them all about the immanent eschaton.

Speaking of the rapture, the end of the world was a big topic in those days, and of course many musicians were just as obsessed with it as Hal Lindsey. It’s not clear if this record is actually musical or spoken word, but there’s something strangely entrancing about the giant Jesus occupying as much of the skyline as an exploding city while magnetically pulling people toward Abraham’s bosom.

But Jesus wasn’t the only one occupying the skyline artwork over freshly pressed vinyl. Old Scratch himself was also a willing model, and as this record attests, he’s definitely real.

The most puzzling part of the “Satan is Real” cover is that the brothers who made the record appear to be standing atop a volcano in all white while singing opera. They don’t seem terribly disturbed that Satan is standing behind them with a slightly annoyed expression on his face. It’s like he’s the headline act and he’s got places to be, but he can’t take the stage until these guys wrap it up already.

Meanwhile standing on things that don’t make sense may have been a pastime in the Christian music studios of the past, as evidenced by this boy and girl  perched atop a giant ghost’s ectoplasmic palm; she seems kind of excited about it while he’s not entirely sure but he knows a smile is required.

Then, of course, there are the unique ministry records. Those who have ever seen The Power Team shred a phone book in Jesus’ name know the power of the unique ministry. If a strongman isn’t what one is looking for, however, there’s always the dynamic combination of martial arts and Pentecostal power one can find in The Karatist Preacher.

The days of the strange Christian specialty record have long past and are now starting to fade from memory, just as the cardboard covers that held each pressing are also fading and falling apart. And while some may laugh at what they once considered cool in the days before Christians tried to be cool, they can at least rest in the knowledge that they never made the cover for DC Talk’s “Nu Thang”.

Receive news in your inbox, Daily!

God and Basketball: The rise of Evangelical universities in NCAA Division I basketball

God and Basketball: The rise of Evangelical universities in NCAA Division I basketball

Pixar’s “Soul” creator was inspired by a Christian book. He sat down with the author to discuss it.

Pixar’s “Soul” creator was inspired by a Christian book. He sat down with the author to discuss it.

The Internet is rife with ‘Christian’ Taylor Swift parodies. One man fell headfirst into that world.

Please log in again. The login page will open in a new tab. After logging in you can close it and return to this page.

We use cookies on our website to give you the most relevant experience by remembering your preferences and repeat visits. By clicking “Accept”, you consent to the use of ALL the cookies.
Cookie settingsACCEPT
Manage consent

This website uses cookies to improve your experience while you navigate through the website. Out of these, the cookies that are categorized as necessary are stored on your browser as they are essential for the working of basic functionalities of the website. We also use third-party cookies that help us analyze and understand how you use this website. These cookies will be stored in your browser only with your consent. You also have the option to opt-out of these cookies. But opting out of some of these cookies may affect your browsing experience.
Necessary Always Enabled
Necessary cookies are absolutely essential for the website to function properly. This category only includes cookies that ensures basic functionalities and security features of the website. These cookies do not store any personal information.
Non-necessary
Any cookies that may not be particularly necessary for the website to function and is used specifically to collect user personal data via analytics, ads, other embedded contents are termed as non-necessary cookies. It is mandatory to procure user consent prior to running these cookies on your website.
SAVE & ACCEPT