I’m a pediatric specialty therapist and a convert to the Catholic faith – I’m a part-time seminarian – and while I remain faithful to my church I feel that it is time to speak out in favor of affirming the identities of LGBTQIA+ youth.

My eyes started opening two years ago when I encountered suicidal LBGTQ youth from conservative Christian homes whose suicidal ideations occurred at higher rates than their non-religious/progressive Christian peers.

Gender dysphoric/transgender youth and their families are under attack right now in Texas with threats from Child Protective Services charging the parents with child abuse for following their doctors’ orders and the medical consensus.

I have worked with neurodiverse children in the disability community for many years. Because of that work, just as I understand that there are variances in neurology, psychology, and biology in a certain percentage of the population, there are likewise variances in gender and sexuality for a certain percentage of the population.

The LBGTQ experience is actually three to six times higher in families with other neurodiversity like Autism. This does not make anyone less of a person but uniquely made in God’s image. I am sorry to say that I was unable to see this truth until recently by making connections and bridges between the disability world and the LBGTQ spectrum. The LBGTQ spectrum is not a disability spectrum but indeed a true spectrum of psychology, not a “gay agenda” or a “personal choice” as so many who don’t know claim over the medical consensus of professionals.

Just as many neurological conditions are intrinsically fixed by the age of 18, cannot be changed, and typically show starting signs in early childhood in many cases, we need to be aware that this is also true for LBGTQ children. The vast majority of medical professionals say to fully support a child’s gender identity and sexual orientation. This support can be critical – when one parent fully supports their LBGTQ children, the suicide rate dramatically drops.

Twenty-five percent of children who come out as gay or transgender are expelled from their own homes and conservative churches; these children are much more prone to suicide and other harmful experiences. The suicide rate in LBGTQ youth from conservative religious families and churches is twice as high as it is for those from non-religious/more progressive religious homes and churches. Any effort to coerce or change an LBGTQ child’s identity such as through gay conversion, reparative therapy, or threats of damnation is deeply damaging and can sometimes cause irreversible damage.

Fully accepting the LBGTQ can be difficult for conservative Christian parents, professionals, and ministers in particular because Christians have to reconcile faith issues and be at peace with God while unconditionally loving and supporting LBGTQ youth and adults. The lives and health of LBGTQ people depend on at least one person or parent fully affirming and supporting them along with other professionals and ministers.

That is why, even though there is a theological conflict with my Catholic faith, my Catholic faith in reverse helped me place the sanctity of life, the dignity of the human person, and unconditional love above any doctrinal struggles I had. Pope Francis tells Catholic parents of LBGTQ children to support and love their children unconditionally and not reject them as he tells the Catholic Church this. By Pope Francis doing this, it’s projected that Pope Francis saved tens of thousands of lives by preventing parental and ministerial rejection.

My own children were raised in conservative Christian churches, homes, and Christian schools. They all came from stable Christian homes with married parents. Sometimes our family struggled with the Church and Christian entities accepting our neurodiverse family in various ways, but overall, Christians were more accepting than rejecting. Both their gestures of acceptance and rejection have affected our children in various large and small ways into adulthood. Overall, they still do well but struggle with feeling loved by other Christians, and they struggle with their faith because of the way other Christians have treated our family over many years.

Rejection negatively affects neurodiverse children for the rest of their lives. With the right love, support, following science, and following the doctors’ orders from our family over the years, all four of our children are thriving from being in law school, applying to pharmacy school, working with vocational licenses, graduating from college, serving their communities, and getting married. If my husband and I had not followed our doctors’ orders, had not given unconditional love, and full support, our children would either not be doing well or not be alive today.

Let’s look at the Parable of the Sower in the context of responding to LBGTQ or neurodiverse children. Some of what follows is from the group Freedhearts, but I added some of my own good and bad fruit which I have personally experienced as a professional.

“Jesus’ parable to answer his disciples’ question about how to know if something is true. Jesus’ answer was, “Look at the fruit. If a tree bears good fruit, then you know it is a good tree. If it bears bad fruit, it should be chopped up and used for the fire.”

When we look at the consequences (the “fruit”) of rejecting the neurodiverse and LBGTQ children in the family, church, and society, we find depression, anxiety, self-hatred, shame, self-harm, substance abuse, separation from God, the church, community, isolation, anger, serious mental illness, and even suicide.

But when we teach that God, the Church, the family, and the community loves and accepts neurodiverse and LBGTQ+ people unconditionally, the fruit is health, healing, love, joy, peace, self-acceptance, stable relationships, reconciling with God and the Church, family unity, and wholeness.

Fully accepting and including transgender/gender dysphoric children would be no different than fully including and accepting children with disabilities and/or neurodiversity like Autism. Being LGBTQ+ is not a disability, but it is part of being on a spectrum intrinsic to being human. Unless you are capable of life-long celibacy for yourself, you are not qualified to expect this from someone else. Someone’s sexuality is between them, God, their loved one/parents, and no one else.

LBGTQ kids need unconditional love and support, especially from other Christians, for their dignity, the sanctity of their lives, and suicide prevention. Love and support from other Christians is seen as love and acceptance from God. Christians rejecting or trying to change who they are is seen as rejection and abuse from God. Jesus and the Gospels were all about love, inclusivity, and defending the marginalized. 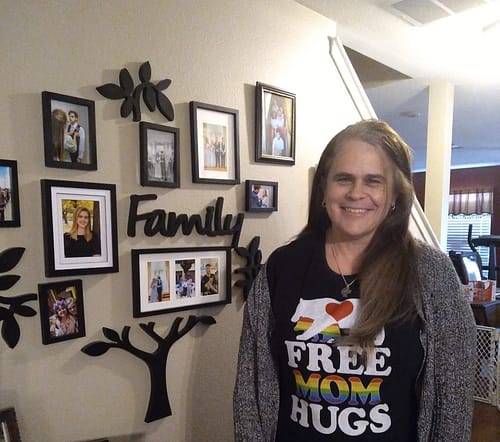 I understand that doctrine is part of the Bible and the Catholic Church, but the Catholic Church allows Catholics to theologically place the sanctity of life above all else in life and death cases. Jesus came for the disenfranchised, the ones society rejected. If we claim Christ’s name, we need to follow His command to love the Lord our God with all of our mind, soul, and strength and love our neighbor as ourselves. This would mean loving transgender/gender dysphoric youth unconditionally, using their preferred pronouns and name, and including them, not excluding them. Just doing these things will help reduce the suicide statistics dramatically.

This is why I wear my “free Mom Hugs” rainbow shirt, to save lives and follow the science.

Receive news in your inbox, Daily!

Pastor donating more than prayer when he gives kidney

Please log in again. The login page will open in a new tab. After logging in you can close it and return to this page.

We use cookies on our website to give you the most relevant experience by remembering your preferences and repeat visits. By clicking “Accept”, you consent to the use of ALL the cookies.
Cookie settingsACCEPT
Manage consent

This website uses cookies to improve your experience while you navigate through the website. Out of these, the cookies that are categorized as necessary are stored on your browser as they are essential for the working of basic functionalities of the website. We also use third-party cookies that help us analyze and understand how you use this website. These cookies will be stored in your browser only with your consent. You also have the option to opt-out of these cookies. But opting out of some of these cookies may affect your browsing experience.
Necessary Always Enabled
Necessary cookies are absolutely essential for the website to function properly. This category only includes cookies that ensures basic functionalities and security features of the website. These cookies do not store any personal information.
Non-necessary
Any cookies that may not be particularly necessary for the website to function and is used specifically to collect user personal data via analytics, ads, other embedded contents are termed as non-necessary cookies. It is mandatory to procure user consent prior to running these cookies on your website.
SAVE & ACCEPT